Norwegian Dawn is a cruise ship in operation with Norwegian Cruise Line. It was the first NCL vessel to carry hull art. The idea went over well and, as a result, hull art was then incorporated on most other NCL vessels, with the exception of those vessels scheduled to transition out of the fleet within the next few years. 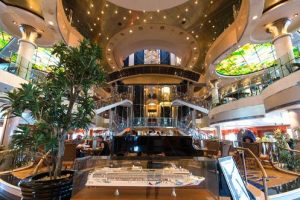 One of the ship’s more interesting features are twin Garden Villa staterooms. The 3-bedroom, 6,694 square foot Garden Villa comes complete with butler service, a piano and a private garden. The large staterooms will make it hard for you to resist stretching out while enjoying your time onboard. Norwegian Dawn has many wonderful public spaces as well, including the acclaimed Cagney’s Steakhouse, Dawn Club Casino and The Oasis Pool, and many restaurants, bars, entertainment and activity areas. The lobby, a magnificent eight-deck high Grand Atrium, is a spectacle all it’s own.